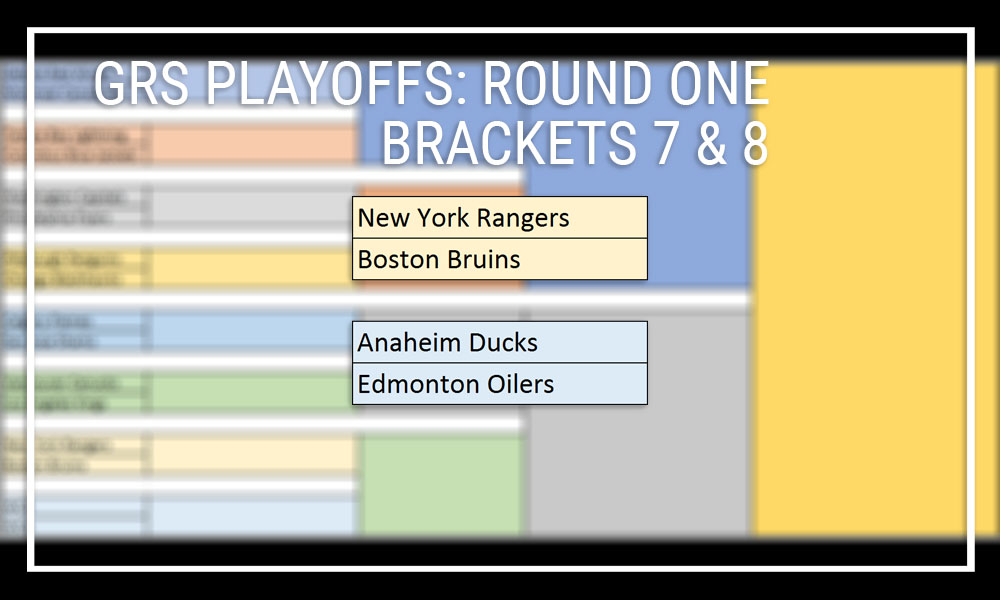 Today is the last of the matchups in round one of Ellie’s playoff series.

The last two teams, wildcards, too, will be decided at the end of this blog post, joining the four already determined earlier this week.

After that we’ll move into round two. But, let’s not get ahead of ourselves.

It’s short, but I’ve got no clue how to say this Rangers name: Brady Skjei.

Funniest? I don’t really know how to say this one, either, but Pavel Buchnevich. His last name reminds me of buccaneer.

Funniest? Ryan Spooner. Do I really need to explain why?

Rangers have my fourth hands down of this playoff round in goalie Henrik Lundqvist.

Much like the Kings, the Rangers have a shield-style logo. It’s just a shield with New York Rangers written across and down it. Simple and neat.

Boston have a unique-style logo. It’s the Boston black and yellow colours. The design could be best described as a wheel with spokes coming out of the centre, which has a big bold B. No other NHL team has a logo quite like this one. Bold and different. Pretty Boston, if you ask me.

The Rangers were one of the NHL’s Original Six. They play out of what is considered the Holy Grail’s of venues – Madison Square Garden. Since joining the NHL in 1926, the Rangers have won the Stanley Cup four times.

The Bruins are another Original Six team. They been in existence since 1924, are the olden US-based NHL team and third-oldest overall in the league. The Bruins have won six Stanley Cup championships, tied for fourth most of all-time with the Blackhawks and tied second-most of any American NHL team also with the Blackhawks.

The Bruins are pretty great on the socials. Their temporary logo at the moment, which runs with the NHL’s overall theme of equality, is a particular standout. Boston have continual good, fluid content on their feeds. Kiss Cam videos are a highlight. Their feed is a good happy place to be.

Like Vancouver, the Rangers socials are OK. They do they right things, but they’re kind of boring.

The Rangers and Flyers are the only two NHL teams without a mascot.

Blades the Bruin serves as Boston’s mascot. Blades is also kinda boring but there is this big long, poetic story about how Blades came to be. If you’re dying to know, here you go.

The Ducks’ roster is easy on the tongue. Funniest name? Jakob Silfverberg. Why did you chuck an F in Silverberg?

Where in the heck are the Oilers pulling these guys from? Drake Caggiula, Leon Draisaitl, Iiro Pakarinen, Jordan Eberle, Jujhar Khaira!

Funniest? Patrick Maroon is chuckle worthy. So is Anton Slepyshev. I don’t really know how to say that one either, but, Sleepy-Shev.

Anaheim’s colour scheme is gross. The design is gross. It’s just not a good time. The current Ducks logo features a webbed foot forming a D. This D has a bird inside. The colours are gold, which sometimes looks bronze, black and orange. They should have kept their old colours and logo!

The old logo was an old-style goaltender mask, shaped to form the appearance of a duck bill. Behind the mask are two intersecting hockey sticks, a black circle and a triangle. Their colours were white, purple green. Muuuuchhh better – and way cooler – than what they have imagined up in recent years.

The Oilers on the other hand have a sleek, easy design. Like Boston, they’ve gone for a circle design with text inside. It just says Oilers and there’s a drop of oil, but it is orange – on par with their colour scheme. Easy to look at, easy to digest, appealing. Take note, Ducks.

The Ducks’ founding is unique compared to other teams in the NHL. It was founded in 1993 by the Walt Disney Company as the Mighty Ducks of Anaheim, based on the 1992 film that I think all hockey fans love and cherish, The Mighty Ducks.

Disney sold the franchise in 2005. The name of the team was changed to Anaheim Ducks in the 2006-2007 season. The Ducks have made the playoffs 12 times and have won Stanley Cup behind them.

The Oilers were founded in 1971. The team was as one of 12 founding franchises of the World Hockey Association (WHA). The Oilers joined the NHL in 1979 as one of four franchises introduced through the NHL merger with the WHA.

After joining the NHL, the Oilers went on to win the Stanley Cup 5 times, and they were in a row – 1983 through to 1990. This remains the most championships won by any team since the NHL-WHA merger and also the most won by any team that joined the league in or after 1967.

Gretzky was an Oiler before he was traded to the Kings.

Among all NHL teams, only the Habs have won more Cups since the League’s 1967 expansion. For their success in the ‘80s, the Oilers team of that era was honoured with dynasty status by the Hockey Hall of Fame.

GIFs, photos, information… the Oilers do OK on social media. Nothing amazing though.

The Ducks are actually pretty good on the socials. I’m glad to see their horrendous logo and colour scheme don’t hold them back. They’re into their hashtags, share photos of fans with players, are engaging. They have a little more personality than the Oilers.

The Oilers got their first ever mascot in 2016. Way to catch up, guys. Hunter, a Canadian Lynx, is their mascot and he apparently freaks people out. “Demon” and “soul-eating wildcat” has been used to describe poor Hunter.

I loved the clip they put together of Hunter back when he was first introduced. It was called Hunter vs Harvey and it was basically prepping the new mascot on how to pull Harvey the Hound’s big ass tongue out.

Wildwing is the Ducks’ mascot. He’s a duck. He was the first NHL mascot to descend onto the ice from the rafters of the arena. He was also featured in the animated series Mighty Ducks.

And the winners are?

The eight teams going through to the next round are:

Meaning the round two match ups will be:

If you have a suggestion on what criteria Ellie should consider (such as best goalie mask, points, facial hair – anything) to pit these teams against each other leave a comment of Tweet @E1mawa.