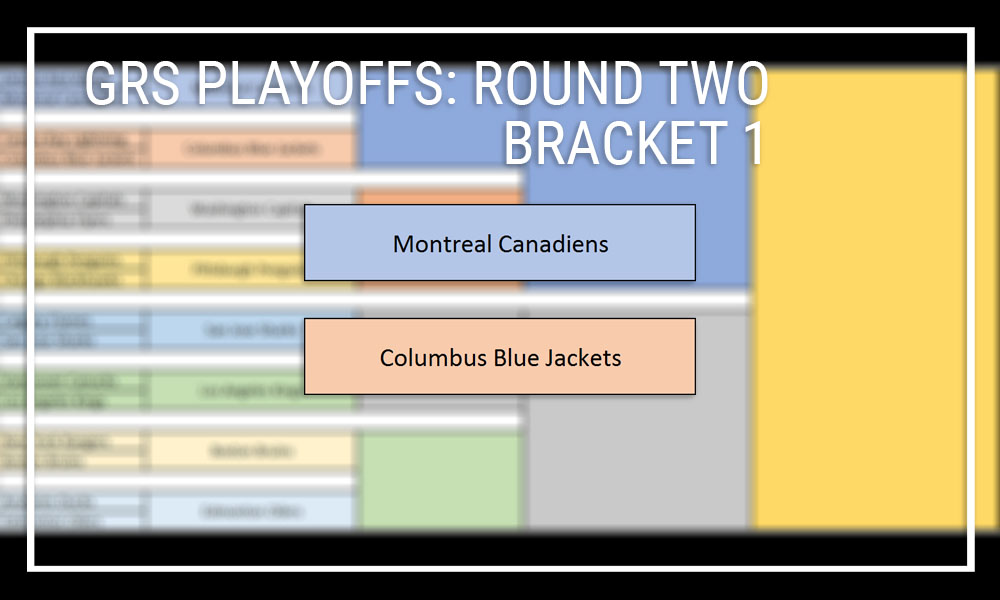 I thought this would get easier with time. But I’m telling you this little playoff series of mine is actually making the decision on which NHL team to follow harder.

The more I read about the teams, the more I like each of them. Which is not at all conducive to whittling them from 8 to 4 to 2 to 1.

But, on with the show.

Standings (as of Sunday)

Columbus: The BJs are doing pretty well this season. They are currently fourth on the overall NHL ladder (the Habs are ninth) and third on the Eastern Conference ladder (Habs are fifth), just one point behind the Pens who they beat in OT on Sunday.

The BJs are having a great season, compared to 2015-2016 which was pretty awful (so I understand from reading a few articles).

A recent Sportsnet story, which compared the BJs to the Toronto Maple Leafs, by Luke Fox outlined what Columbus have going for them this year, and what is contributing to their improved form:

Fox said in his Sportsnet story: “The Blue Jackets haven’t just surprised this winter; they’ve wowed”. The wow was a 16 game streak which “awoke a giant called The Rest of the League”. If you have any interest in learning more about the BJs, I encourage you to read Fox’s story.

NHL standings as of February 19

Montreal: The Habs have fallen pretty far since the beginning of the season (which leads into the coaching section, but that’s to come). They were leading the NHL standings for weeks. Now they’re in ninth position, which is five below the BJs.

I read an article, called All of Montreal in a funk about struggling Habs, on the Montreal Gazette’s website that had a funny line: “the Canadiens are in the throes of a slump so awful, the Leafs are starting to look good”.

What I love the most about that line is that I understand it, and it’s funny to me. A couple of weeks ago – before this lil journey of mine – I would not have gotten that at all.

But, back to the article. It was an interesting read – to see how a poorly performing team affects its fans and business. Tickets aren’t selling, jerseys aren’t selling. This slump is certainly not the Habs’ first (Google Canadiens and form slump and a couple of things come up, written from over the years). This form slump discussion also leads into coaching.

Montreal: Up until last week, the Habs coach was Michel Therrien. He was replaced by Claude Julien, who was fired from the Boston Bruins the week before.

An article by USA Today about the hiring and firing had some interesting points and stats about the deal, including that the Habs are the worst performing NHL team since February. Julien returns to Montreal, where he coached from 2003-2006.

This coaching change was made because the Habs needed “new energy, a new voice, a new direction” the team’s GM, Marc Bergevin, said. Days later at a press conference, Bergevin said: “The team performance showed there was something not right and the change had to be made.”

This goes to show that NHL is big business. Your asset, what makes you money, isn’t performing well? Changes must be made.

While the Habs lost their first game (against Winnipeg, meaning the Habs have only had one win in its last eight games) with Julien as coach, it is only early days. But I’m sure he’s feeling the pressure to reignite the spark in the Habs, especially because the team just missed out on the playoffs last season.

The guy is pretty impressive on paper. Much like what happened with the Habs last week, Tort replaced Todd Richards as the coach in 2015 to help the team overcome a form slump.

Tort is known to have a bit of a temper, which attributed to his team-hopping before the BJs. While his hot temper has been known to inspire (with Tampa Bay), apparently it has led to a confrontation in recent weeks.

Reports are that some BJ players have asked their coach to take it a little easier on them now they’re going through a rocky patch in their season. By all accounts though, Tort has listened to his players in the past. And the confrontation, a nice-ish one, shows the players respect their coach enough to talk with him when the relationship is a little on the rocks.

Thank you to Alyssa (@alyssastweeting) for this suggestion! I had no idea there were websites and social media pages dedicated to NHL players with animals until Alyssa educated me.

OK, so, Jared Boll is now with Anaheim. But, he played with Columbus for nine seasons and he’s pictured here with two Labradors when he was with the BJs. So, it counts.

Brandon Saad and his weenie, Louie. These two take the cake. I actually think Saad and Louie win the internet. Want to see more? Follow Louie on Instagram: @little_weenies_only.

Carey Price (Habs goalie) has two Labs name Motty (short for Mozart) and Duke. They’re to die for. When Googling Motty and Duke I found a 2014 story about the two escaping. They were found by a man and when he returned them home, Price gave him a signed stick. Pretty cool!

There’s an entire webpage dedicated to Carey Price’s goalie masks. They only go up to 2011 though.

Would you believe that it was actually pretty tough to find information on Price’s 2016-2017 mask? Well, it was.

Yet I found an entire video dedicated to Al Montoya and his mask. Weird. Good, but weird.

It was also pretty hard to find anything about Sergei Bobrovsky’s (goalie for the BJs), too.

How is it that it’s such a mammoth task to find anything on these two team’s starting goalies masks, yet Al, the Canadiens backup, was simple?

Columbus: For the 2007 season, the BJs bought a handmade replica cannon. The cannon is fired at home games whenever:

The song is For Those About to Rock we Salute You by AC/DC. Check out the video of the goal horn and song here.

Montreal: The Habs have a traditional sounding goal horn. It’s long and kind of high pitched. It’s followed by a song called Le But (Allez Montreal) by Loco Locass.

The Habs have something else music-y going for them. They have an organ player. Diane Bibaud plays the organ during Habs home games, a role she’s had for close to 30 years. She was given the boot in 2003, for a second time, but brought back in 2011 because management noticed something was missing from the games. That’s a pretty nice touch.

If you have been following this blog series from week one I’m sure you would have noticed that the Habs are a favourite of mine. As for why, I really don’t know. Carey Price is something special. I think he’s spectacular. The team is sleek, professional, historic. I’m just drawn to the Habs.

So, it may come as a shock then to hear that I’m eliminating them.

Yes, you read that correctly. The winner of this bracket is the Columbus Blue Jackets. The BJs are through to the next round.

Why? Aside from the reasons I just stated I still really don’t know why I like the Habs. And at the moment, I think they’re imploding. It seems like their only star player is Price. And even he isn’t holding the team together.

The BJs on the other hand are on the cusp of something. They’ve had a successful, franchise record-breaking, start to the season. They’ve hit a rough patch, but are working through it. I like their old mascot (I may campaign to get Boomer back), have star power, Brandon Saad’s dog is brilliant. I like a lot of things about the BJs. And I can state what they are.

That is why the BJs are through to round three.