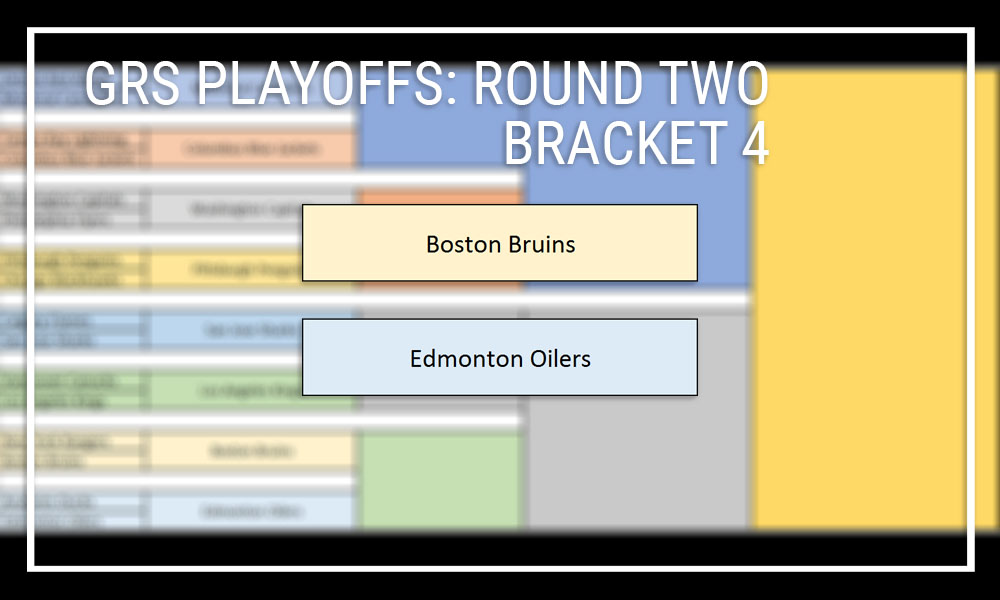 Here we are. The last day of Round 2.

Will it be the Bruins or the Oilers that make it into Round 3?

Standings (as of Wednesday)

Edmonton: The Oilers are currently fourth in the Western Conference standings while they’re placed ninth overall in the NHL. It has been a big couple of years for the Oilers, who are in a rebuild period of their franchise. 2015 was perhaps their biggest year.

They used their first overall pick at the draft to nab Connor McDavid (the 19 year old star player was named the team’s captain in 2016 making him the youngest captain in NHL history. He’s leading the team in points, too).

They fired their GM and hired former Boston GM Peter Chiarelli, fired their head coach, some assistant coaches and scouts and made perhaps the biggest change – moving venues to a bigger, brighter, shinier arena. Oh, and they got their very first mascot. These changes seem to be working for the team.

They’re not cellar dwellers anymore; they’re showing they’re real contenders for the playoffs – and that’s despite facing a little performance issues earlier this month (they just haven’t been scoring).

The standings as of February 22.

Boston: The Bruins are coming ninth in the Eastern Conference standings and are 15th overall. Their season has not been great, which led to the recent firing of their coach Claude Julien. Julien won the Stanley Cup with the Bruins in 2011 and was the longest-tenured coach in the NHL until he was sacked.

Stanley Cup of Chowder, the SB Nation fan news website for the Bruins, speculated that “maligned moves” like trading Johnny Boychuk, Tyler Seguin, Milan Lucic, and not keeping Martin Jones for more than 24 hours, has hampered the team to find consistency. Matt Beleskey and Jimmy Hayes also don’t appear to have worked out as well as Bruins expected.

I really like Boston’s “Behind the B” video series. This is the fourth year the team has granted cameras access to the team (locker room, boardroom, player’s home) to produce a behind-the-scenes series for fans to see the inner workings of the organisation. I have watched NHL docos during this season, but I haven’t come across any other team that does something like this (though, I could have easily missed it).

Edmonton: Todd McLellan was brought on to the Oilers as the head coach in 2015, as part of the management’s attempt to haul the team from the bottom of the ladder. It does seem to be working, but McLellan is one piece of the puzzle as I discussed in the standings section.

McLellan has turned the Oilers into a completely different team, and one of the reasons why his coaching has worked is because he is honest. His unwavering honesty makes him realize the problems with his team, and helps him address them head-on. He has scratched top paid players from the team because he knew they weren’t a good fit.

Boston: Bruce Cassidy was named as the interim head coach of the Bruins on February 7 following the firing of Julien. Cassidy was Julien’s assistant coach. This is Cassidy’s second stint as an NHL head coach, having previously coached the Washington Capitals from 2002 to 2004.

At the time of the coach change, Cassidy said he wasn’t expecting to make a massive change, but would tweak the team’s defence to get “the puck back a little quicker” and “being more opportunistic with our chances” on offence. The guy sounds pretty rational.

If you actually did it, you’re welcome. Because holy adorableness! The Oilers have made a thing out of pets in tiny Oilers gear and it is glorious!

Plus, the Oilers do this thing on social media the first Monday each month. A pet is featured and for every like, comment and share of the ‘official’ photo, $1 is donated to the Edmonton Human Society. Brilliant!

Boston: David Backes and his wife Kelly are huge animal lovers, so much so they founded Athletes for Animals. The pair do a wide range of ‘things’ to help various animal welfare organisations.

David and Kelly Backes with their pooches.

There’s a Pinterest board dedicated to the Bruins players with dogs, including Brad Marchand patting a service dog at Military Appreciation Night on in 2014. Super cute!

Edmonton: Laurent Brossoit (who is really very good looking BTW) has a pretty basic mask, but I like it. It’s mostly white with the Oilers orange and blue down the middle and on the sides.

The sides of the mask feature the Oilers iconic drop. Down the centre of the mask however is a strip of orange with logos spaced out along it. On the bag is a quote to promote MS awareness, which is really nice: “We don’t know how strong we are until being strong is the only choice we have”.

Cam Talbot has had some pretty sweet goalie masks. This season he’s rocking a Ghostbusters-inspired lid. It incorporates three of the most recognizable symbols from the movie. Unlike the character-centric masks of the past, this time Talbot’s mask is cantered on the Ghostbusters’ famed mode of transportation, the Ecto-1.

Boston: Tuukka Rask’s is the stuff of nightmares! It’s a bear (the Bruins animal) on steroids!

Anton Khudobin’s lid also features a Bear. I was able to find a bit of information on his mask: “On one side we put a mean looking realistic bear with a pearl effect to make it come alive with a glossy clear,” the mask’s creator, Sylvie Marsolais of Sylabrush, said. “On the other side you can see the TD garden with the Bunker Hill Memorial Bridge that you cannot miss when you go see a Bruins game. For the chin we took the “B” from the Bruins logo and incorporated it in his nickname, ‘DOBBY.’ The Russian Phoenix remains as always on the backplate.”

This story is also worth checking out: colour changing lids. Khudobin has one, so does Tampa Bay Lightning goalie Andrei Vasilevskiy.

The Oilers’ and Bruins’ goalie masks have by far been some of the easiest to find.

Edmonton: The Oilers are another team with this high pitched, long winded goal horn. Their goal song is called Stab by the Three Attacks.

Boston: Of all the goal horns I’ve heard this week, Boston has the most unique one. Granted, it’s still a goal horn but it’s two short, deep horns followed by the song which is called Kernkraft 400 (Sport Chant Stadium Remix) by Zombie Nation.

Look, I like Edmonton. I like the new phase they’re in and how they’re coming along. And they have the Gretzky link.

But there’s something about Boston I just really like. It’s somewhere I’ve always wanted to go, I have a fascination for Boston-ites (the people), they have a deep appreciation for sport and Boston is home to two of the biggest sporting teams – the Bruins and the Red Sox.

I have a connection with the Stanley Cup of Chowder through my AIHL team, the Newcastle North Stars. I like the feel of Boston, they’re talented, but not quite together with it right now.

So, I pick Boston.

And that brings me to the end of Round 3.

This week I have narrowed 8 teams down to 4: Columbus Blue Jackets, Pittsburgh Penguins, San Jose Sharks and Boston Bruins.

Next week’s matchups will be:

Just two more weeks to go and this series will come to an end.

If you have any suggestions on how I can pit teams against each other next week, let me know. Tweet me @E1MaWa.