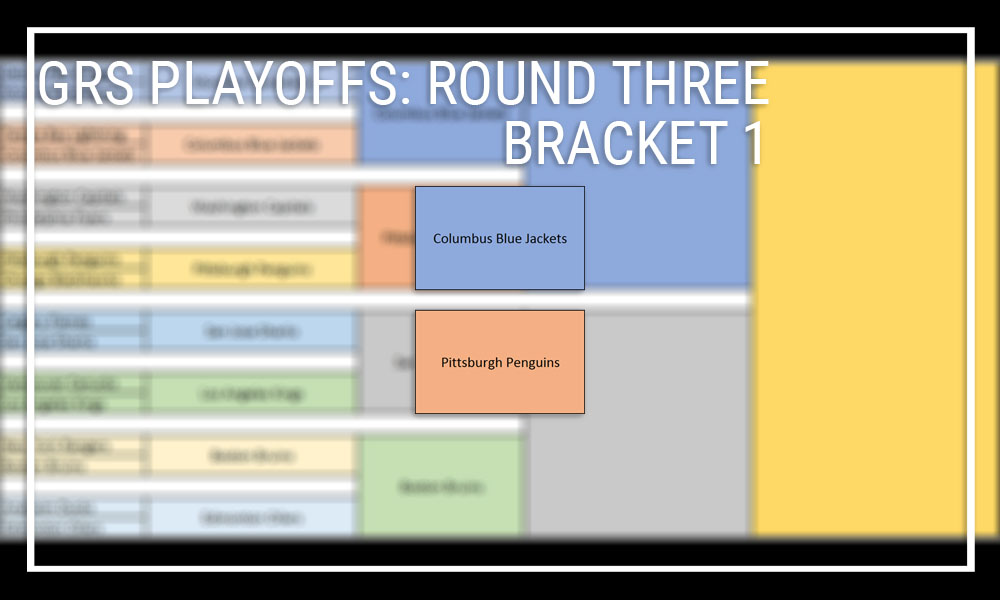 So close you can touch it – to the end of my blog series, that it.

We’re into round three of my NHL team-finding playoffs where its the Columbus Blue Jackets facing off against the Pittsburgh Penguins and San Jose Sharks against Boston Bruins for a spot in the final round – the one where I pick my NHL team.

Without further preamble, game on!

Columbus: The Blue Jackets play their home games at Nationwide Arena in downtown Columbus, which opened in 2000.

It is one of two large-scale facilities in Columbus, along with Greater Columbus Convention Center, that hosts events during the annual Arnold Classic, a sports and fitness event hosted by ya boy Arnie Schwarzenegger.

The area surrounding Nationwide Arena, appropriately called Arena District, houses bars, clubs and a movie theatre. Columbus uses the arena as a drawing point for the city. Establishments in the area feed off the foot traffic.

The Lifestyle Communities Pavilion, a concert venue, and Arena Grand Theatre are adjacent to Nationwide Arena and completes the entertainment complex.

I’m big on rinks/arenas having extra things around them. A pub, bar or restaurant are great assets to have near a sporting venue. Fans can make a day out of it. Grab something to eat or drink before, head to the game, and go to the pub or another restaurant after for dinner.

Ease of access is a real asset to. If your rink/arena is close enough to other establishments to encourage foot traffic, on top of having public transport to and from the area, you’re laughing.

In Australia, Melbourne has this. The rink is in a shopping district with food and drink venues nearby. It does need a little improvement – such as needing more food places open later. But, it is better than other rinks around Australia which are largely in business districts with nothing around them.

Nationwide Arena houses a smaller ice rink inside. This is the practice ice for the BJs, and is also used for youth hockey games and open skates for the public. This was the first arena that gave a NHL team an on-site practice rink, and is only one of three (the others being First Niagara Centre, home of the Buffalo Sabres, and the Prudential Centre, home the New Jersey Devils).

By all accounts, Nationwide Arena is one of the best in the league.

Which, in some twisted way, makes it being the only arena for a NHL-related accidental death almost fitting.

In 2002, a 14-year-old girl, Brittanie Cecil, was hit in the head by a deflected puck during the BJ’s game against the Calgary Flames. Brittanie died two days later, becoming the only NHL fan to be killed in a game-related accident. As a result of her death, the NHL mandated safety netting in all its arenas.

Pittsburgh: The Pens played out of Civic Arena from their start in 1967 through to the end of the 2009-10 season. They moved to their current arena, PPG Paints Arena, for the 2010-1011 season, and have played there since.

Civic Arena was located in downtown Pittsburgh. It was the first major-sports venue in the world that had a retractable roof. The arena was closed in 2010 and demolished in 2012.

PPG hosted its first Stanley Cup Finals in 2016, which saw the Pens defeat the Sharks in six games to win its fourth Cup. Although the Pens clinched the Cup at the SAP Centre (home of the Sharks), PPG hosted a watch party for what turned out to be the series-clinching game, charging $10 for admission. All proceeds went to the Pittsburgh Penguins Foundation. The arena’s goal horn played after every Penguins goal just like at a regular home game.

Pittsburgh: The Pittsburgh Penguins Foundation has a nice-looking website. It’s probably the nicest one I have seen so far.

Each NHL team’s foundation will focus on something different. While a lot are about helping kids, and developing youth hockey, the mission will vary team to team.

The Pens’ mission is: To actively promote physical well-being, encourage teamwork, stress the value of education and provide essential life skills to young people in our community through youth hockey and other activities.
To achieve this mission, each year the Pens foundation run a number of programs and host fund-raising events.

HEADS UP Pittsburgh: This was started in 2011 to provide educational training sessions and events to increase awareness toward the severity of concussions. The program educates parents and children about different concussion symptoms and what measures are necessary should an athlete sustain a possible concussion.

PensFIT: Started in 2012, this program is designed to introduce children to the sport of hockey and get them more fit and active. Through the program, teachers are provided training, instruction and supplemental materials, and the opportunity for continuing education sessions featuring Pittsburgh Penguins coaching staff and alumni.

Learn to Play: Through the combined efforts of Pens captain Sidney Crosby, the Pittsburgh Penguins, the foundation, Reebok and Dick’s Sporting Goods, Sidney Crosby’s Little Penguins Learn to Play Hockey program has introduced more than 4,200 Pittsburgh-area children to the game of hockey.

Skates and Plates Charity Gala: Since 1986, the Penguins have hosted an annual charity gala for the benefit of local children’s charities that focus on medical research. The events have raised over $5.75 million.

Hockey Fights Cancer: This is an NHL-wide initiative started in 1998. To date, more than $12.8 million has been raised to support US cancer research institutions, children’s hospitals, player charities and local cancer organisations. The Pens have contributed to this since 1998.

Pittsburgh Penguins Foundation 50/50 Raffle: After the Commonwealth of Pennsylvania legalised 50/50s in 2013, the Pens began hosting one. For those who are not familiar with what a 50/50 is, attendees of the game buy raffle tickets.

The money from all raffle ticket sales is pooled, then split into two. One half goes to raffle ticket winner, the other half goes to a nominated charity. For a NHL game, it’s not uncommon for the 50/50 winner to walk out with $20,000 plus.

A different charity is selected to participate at each game. In the 2015-2016 season, the foundation was able to donate more than $1.1 million to more than 100 charities through the 50/50 funds.

While all NHL teams have some sort of foundation, or charity focus, the Pens are one of the teams that goes the extra mile. The have a lot of programs, events and fund-raising initiatives that players are part of to raise a lot of money for their community, and worthy causes.

Columbus: When I first went to look for the BJs’ foundation page I came across their old one and all I could think was ‘that has to be one of the ugliest foundation pages of the NHL’. Their current one is rather boring, too.

Mission: The Columbus Blue Jackets Foundation is dedicated to the health and wellness of children in Central Ohio. We dedicate time, resources, and financial support to organizations making a difference in the areas of paediatric cancer, reading, fitness through play, and the growth and development of amateur hockey.

The grandest thing the BJs have going for them is one of their annual events. It’s a ball. Guess what they call it?

Other events and initiatives include:

A Golf Classic: how… classic.

Get Healthy Assist: For every BJs assist this season, Boich Companies are donating $20 to the Foundation to help its fight against paediatric cancer.

Columbus: The Cleveland Monsters (awesome name, guys) are the BJs’ AHL (American Hockey League) affiliate. Think of an affiliate as a feeder team, or where the NHL goes to pluck its rookies from.

The Monsters began playing as the Lake Erie Monsters in 2007. The name refers to a creature of local folklore.

They have been the BJs affiliate since 2015, so, only a relatively new deal. The Monsters won the AHL Championship in 2016 (the same year they changed their name), which is one more championship than what the BJs have.

Pittsburgh: The Pens’ AHL “farm” team have a similar logo to them, which I like.

The Pens’ top minor league affiliate throughout the 1990s was the Cleveland Lumberjacks of the IHL. They developed their AHL connection with the Wilkes-Barre/Scranton Penguins in 1999. The Baby Pens, as they are affectionately referred to as, have been around since 1981.

Their mascot, Tux the penguin, wears #99 in reference to the team’s first season in 1999.

The WBS Pens have gone to the Calder Cup Final (AHL Championship) three times but have never won it.

Columbus: I found plenty of pregame analysis for the BJ games but nothing on their pregame entertainment.

Not a mention or video!

What is this hullaballoo?

Pittsburgh: When looking for Pens pregame entertainment goodness, all that pretty much came up is PETA being pissed at them for using real penguins for some LOLs  and AWWWs during the Stadium Series.

If you somehow missed it, the Pens asked Pittsburgh Zoo to pretty please bring in some penguins – who are named Crosby, Kessel, Kunitz, Letang, Malkin, Murray and Sully after the players – for some pregame entertainment. The penguins – the real ones – were put on the ice and they played for a bit. PETA got all pissy, saying it was inhumane.

Not my assessment of the situation, but, each to their own.

Aside from this, I found a few YouTube clips of what appears to be a video the Pens play on their Jumbotron pregame. The videos are old, though. From 2012-2013.

So basically, I wasn’t able to find any videos of recent, regular home game, pregame entertainment for the Pens or BJs. Which I find odd. And unsettling. Am I Googling wrong?

While their foundation page is shitty, and their AHL affiliate team have a weird logo, I’m still picking the Columbus Blue Jackets for the win over the Pens.

Don’t get me wrong. I like the Pens, I think Crosby is special and they are a fantastic, charitable team but I am drawn to the BJs. Drawn based on the research I have done and knowledge I possess on the team, their potential and while I can’t find any pre-game stuff, based on the fact they have a cannon and host a Cannonball!

The BJs are through to the very last round!