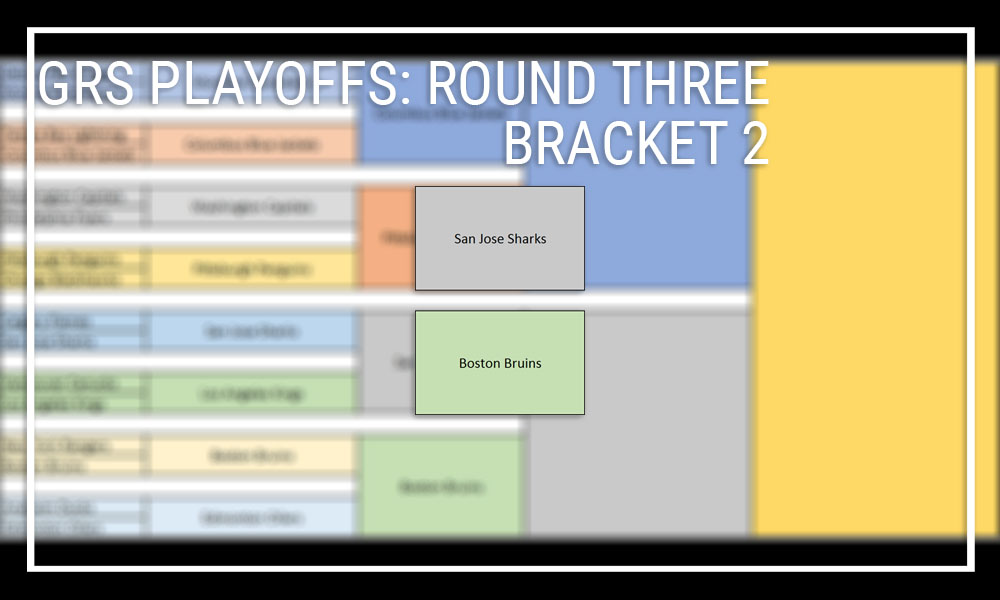 Today’s match up between the San Jose Sharks and Boston Bruins will determine the second team going through to the last round.

The winner of this match up will face Columbus Blue Jackets in the “Cup” deciding round.

What a wild ride it has been these past 14 (give or take, mostly give) weeks. I’ve learnt so much about the NHL, the teams and seen so much – a whole new wonderful world has been opened up to me.

I never really knew what I was missing before. But now I can talk to my friends about what’s happening in the NHL. I know what they’re talking about, I get jokes and I can even tell them things they don’t know.

Bear with me a little longer. Check out who I have picked to go through and meet the BJs; which team is my second most favourite in the NHL.

San Jose: The Sharks play their home games at the SAP Center, called the Shark Tank.

The SAP Center has an interesting backstory. It was initiated by a group of citizens who found potential sponsors and partners (NHL and NBA) then met with the city’s mayor to get it going.

The SAP Center, aka Shark Tank, aka home of the San Jose Sharks.

Construction began in 1991. Soon after the NHL granted an expansion franchise to San Jose, it was discovered that the arena would not be suitable for NBA or NHL use as originally designed. The Sharks requested an upgrade to NHL standards, including the addition of luxury suites, a press box and increased seating capacity.

The SAP Center has been host to a wide range of other sports (WWE, figure skating) and events. It has also been host to All Star games and the 2016 Stanley Cup Finals. The Pens beat the Sharks at the SAP Center in 2016 to clinch the Cup.

Boston: The Bruins have played at TD Garden since 1995. Their first arena, where they first began playing in 1924, was known as Boston Arena (now called Matthews Arena). It’s the world’s oldest indoor ice hockey facility.
TD Garden, its 33rd name, is often called Boston Garden and The Garden. It’s also home to the NBA’s Boston Celtics. It is owned by Delaware North, whose CEO, Jeremy Jacobs, also owns the Bruins.

Like the SAP Center, TD Garden has been host for a number of sports and events.

It is located directly above Boston’s North Station, which is extremely handy for fans.

Boston: The Boston Bruins Foundation has about 30 websites. Okay, more like three. But they need to get that sorted. But the one I really looked at was what is listed on their Facebook page.

Comparatively to other teams, Boston’s foundation page doesn’t have a lot of information. It doesn’t really detail what events they hold or how much they have raised. But, their mission is:

The Boston Bruins Foundation is a 501(c)(3) non-profit organization that assists charitable organizations that demonstrate a commitment to enhancing the quality of life for children throughout New England. The Foundation provides grants to organizations that meet the standards of its mission, concentrating on academics, athletics, community outreach and health. We believe that focusing and developing these four areas in children’s lives creates a solid foundation, strong support system and ultimately leads them to be an impactful member of their community.

(Talk about a boring/straight down the line mission statement)

Some of the events the foundation holds to raise money (briefly shown on the website) include:

Casino Night: The annual event gives fans a chance to mingle with players and have a fun night throwing dice, all of which supports the Boston Bruins Foundation.

The money raised goes towards projects and organisations that achieve the Bruins’ goals. They also run a grant program which is focused on improving the lives of children in New England.

Additionally, each year the Bruins donate thousands of autographed items to support local non-profits with their fund-raising efforts.

San Jose: The Sharks are ridiculously charitable. And they have so much information on their website, of which there is only one.

Mission: The Sharks Foundation is dedicated to enhancing the lives of underserved youth and families in the community with an emphasis in the areas of education, health and safety, and character development.
The Foundation supplies emergency aid when appropriate, executes unique and relevant programming, supports the advancement of youth hockey, and provides financial support and resources to organizations that enrich the lives of those in need.

The Sharks run a heap of programs, host a number of events and make a heap of appearances. They’re amazing.

50/50: The Sharks will make a $20,000 donation and their half of the 50/50 takings for three games in March to the San Jose Flood Victims Relief Fund, which will support non-profits to provide immediate and long-term relief and recovery assistance to flood victims in San Jose.

Goals for Kids: For each San Jose Sharks goal scored during the season, $1100 will be given to local organizations dedicated to enhancing the lives of those in need.

Stick to Fitness: Since its inception in 2014-15, Stick to Fitness has impacted more than 4300 students’ lives at 20 different middle schools in the Bay Area. Stick to Fitness is a fun and active program dedicated to educating sixth grade students on the importance of healthy living, while encouraging them to be active during physical education classes and at home.

Holiday Assist Party: Each year, the Healthy Start Family Resource Center pairs Sharks players, coaches, management and front office staff with underserved San Jose families to help them fulfill their Christmas wish lists. For many of these families, the items provided to them through the Holiday Assist Party are the only gifts they will receive during the holidays.

Grant program: The Sharks Foundation provides $30,000-$50,000 grants for organizations that support youth or youth and their families, with special emphasis toward underserved populations and at-risk youth.

San Jose: Like the Pens, the Sharks’ AHL affiliate team – San Jose Barracuda – has a similar logo to their NHL counterpart.

The Barras, as I am now going to call them, are based at the SAP Center with the Sharks, one of the only organisations to do this.

The Barras and Sharks teamed up in 2015, the same years the AHL team played their first ever game.
Still a new franchise, the Barras have not won a Championship.

Boston: The Providence Bruins the Bruins’ “primary development” team. They have a really ugly, confusing website.

The PBs started out in 1992. The won their first Championship in 1999 after dominating the league that season with 56 regular game wins.

In the 2001-02 season, the PBs contracted with then-13-year-old musician, Ben Schwartz, to work as the official organist at all home games. As a result, Schwartz, who provided music for seven years until the conclusion of the 2007-08 season, holds the distinction of being the youngest organist to ever work for a professional North American sports franchise in history.

San Jose: Thank lord for the Sharks. So many pregame entertainment videos!

But their general pre-game stuff is awesome. Lights. Light everywhere. I love the sharks projected onto the ice, swimming around. Then the Sharks skate onto the ice through a giant Shark head. There’s so much to see, feel, take in during a Sharks game.

It would be so much fun to attend a Sharks home game.

Welcome to the Shark Tank.

Boston: The Bruins pregame show consists of a pretty cool video being shown on the Jumbotron followed by a little bit of a light show and the team skating onto the ice.

They’re such a fun, charitable team, funny team. While I really like Boston, ultimately it’s the Sharks that have captured my attention the most.

So it’s Sharks through to the next, final round.

My last match up is between the Sharks and Columbus Blue Jackets.!