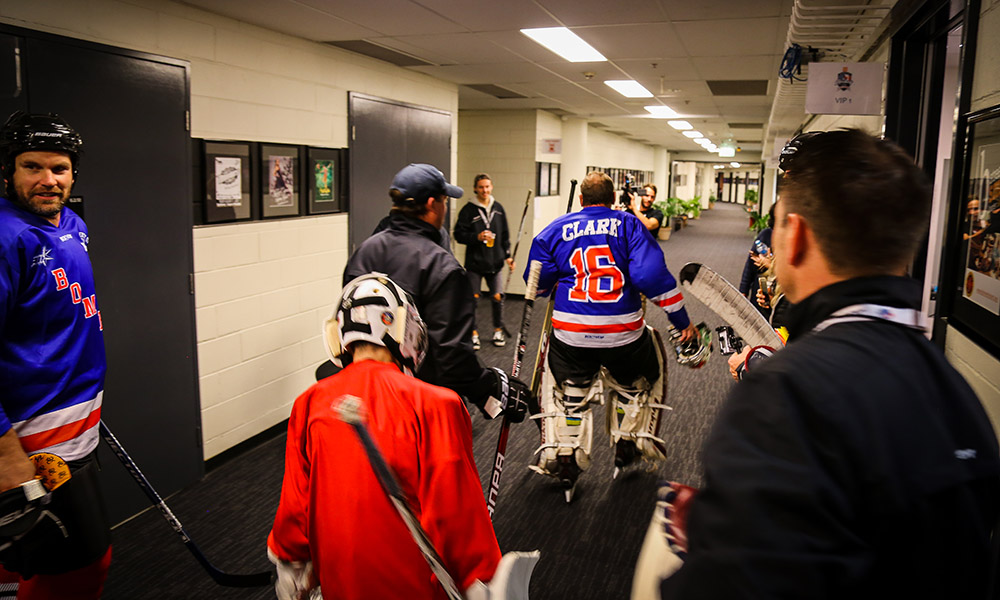 It’s no easy feat to step out of your comfort zone.

It’s particularly hard when you know you will be laughed at.

But for the six former National Rugby League players that stepped onto the ice during the Sydney Ice Hockey Classic, they can be buoyed by the fact that their feat – which was indeed laughed at by some 10,000 people – was for a worthy cause.

During the second intermission of the USA versus Canada game, played in Sydney on June 17, professional rugby league players Steve “Beaver” Menzies, Nathan Hindmarsh, Cliff Lyons, Tim Brasher, David “Wolfman” Williams and Josh Perry laced up skates, pulled on pads and a Warringah Bombers jersey (with some help) and took part in a series of ice skills.

Physicality and a culture of ‘toughness’ aside, the game of rugby league and ice hockey are almost as far apart in similarities as ice and fire.

But for just a few moments, the footballers were ice hockey players. Albeit, novice ones.

There was slipping, sliding, falling and wobbling.

There was even mock fighting.

But there was also skating, shooting, goal saving and some hooking.

What attendees to the classic may not have known was why the NRL players were on the ice.

And why they were wearing blue, red and white coloured ‘old-time’ hockey jerseys.

It was more than some intermission entertainment – they were raising awareness for the Matt Clark Charity Shield.

The shield, established in 1995, was an initiative of the Warringah Bombers ice hockey club. It was created to honour one of its own, Matt Clark, who had his life cut short by leukaemia.

In 2016, the Sydney Ice Dogs, a team in the Australian Ice Hockey League, joined forces with the Bombers to resurrect the shield.

“We have close ties to the Bombers community from our head coach Chris Blagg to players like Mark Gibson, Dave Mann and Brett Thomas, who played for the Dogs as well,” Ice Dogs captain Scott Stephenson said.

“We reached out to the Bombers last year about paying tribute to their club – a powerhouse and storied club from the 70s to the 90s.

“They wanted to bring back the Matt Clark shield as part of the tribute.”

Clark, who had once been a talented footballer, played with the Bombers in the 90s.

As it happens with many Australian ice hockey players, Clark’s brother, Corey, took up the sport, prompting him to give it a go. He joined the Bombers in 1991, aged 14. Two seasons later, aged 16, Clark was chosen to represent Australia.

In 1994, just months after he played in the Asian-Oceania Junior Championships in China, Clark was diagnosed with leukaemia. Shortly after, the disease claimed his life.

Clark had asked his friends and family to find a way to raised money for leukaemia research, which led to the Bombers creating the Matt Clark Memorial Shield.

Having grown up with Gibson, Menzies, one of the retired professional footballers who hit the ice in Sydney, was familiar with the Bombers and Ice Dogs. He supported the shield’s return last year.

“This year we saw the opportunity to go a step further and get the guys to lace up and work with USA vs Canada to raise awareness of the event on a bigger stage,” Stephenson said.

“Dave “Wolfman” Williams is a good friend of ours and trainer of the Ice Dogs.

“When he heard about it he jumped on right away and the guys started putting the feelers out there amongst the NRL community.”

They were helped both in the change rooms to get dressed and on the ice by Bombers and Ice Dogs members.

On Saturday, July 1, the Ice Dogs will return the Matt Clark Shield to Macquarie Ice Rink.

It was here that the last shield match was played in 2001.

Stephenson played in that game. He was a key player in its resurrection in 2016.

Last year the Ice Dogs and Bombers raised $5000 for the Leukaemia Foundation.

This year they are aiming to double that figure with Stephenson even pledging to shave his somewhat iconic beard in pursuit of raising $10,000 for the foundation.

The Ice Dogs’ AIHL game against Perth Thunder will be a charity match, which the six former NRL turned ice hockey players are expected to attend.

From each ticket sold into the game on Saturday, $5 will be donated to the Leukaemia Foundation.

Proceeds from the sale of 2016 Warringah Bombers jerseys with ‘Clark’ on the back will be donated to the foundation.

On game night, there will be a silent auction of the game worn 2017 Clark Bombers jersey.

The Ice Dogs and Bombers are also encouraging people to head to the Leukaemia Foundation’s website to donate.

“I would encourage anyone and everyone to come enjoy a game of ice hockey and support a good cause,” Stephenson said about Saturday’s game.