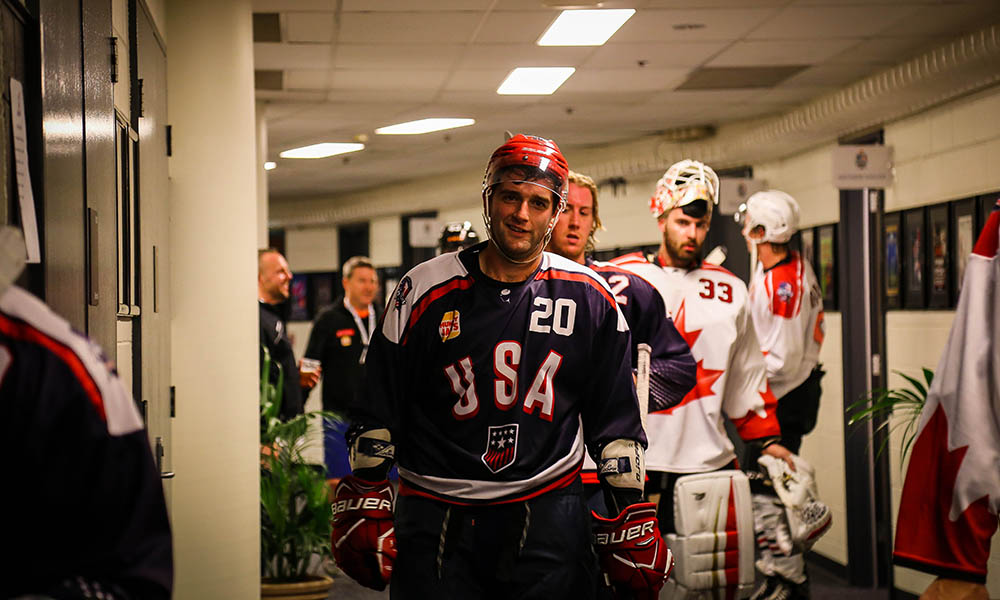 For Bert Malloy, suiting up in the Ice Hockey Classic was a dream come true.

Malloy donned the stars and stripes of his native homeland and, alongside professional hockey players, including from the NHL, played the game he loves in front of 13,000 people on Saturday.

And amongst the crowd was some of his biggest fans – wife Asmara and son Mason.

“I literally dream about this. It’s kind of like a taste of the NHL.

“I’m glad that my boy is here to see this and I hope he remembers this because it’s pretty wild.”

Mason Malloy on the big screen.

It was a big week for Malloy, who is the captain of the Newcastle Northstars Australian Ice Hockey League team.

He played in the charity showcase game in Newcastle on Wednesday, June 14, which saw 700 hockey fans wearing a wide variety of jerseys and apparel pack into Hunter Ice Skating Stadium to watch Team Canada and Team USA play (or, shake off the jet lag) ahead of the Ice Hockey Classic.

“Playing with these guys is a really cool experience,” Malloy said after Wednesday’s game.

“They’re incredible hockey players. It was fun to be part of it.”

Malloy described the experience as less physical and a lot faster when asked how the style of play differed from the AIHL, which he has played in since 2010.

The following day he was in the Ice Hockey Classic and on Sunday, returned to Macquarie to face the Sydney Bears with the Northstars.

Shifting the Ice Dogs game to Friday night allowed Malloy to play in the classic.

Bert Malloy in action during the 2017 Ice Hockey Classic event in Sydney.

“They were in need of a body, and I played with them in Newcastle on Wednesday night,” he said.

“Everything lined up. They changed our game to Friday night, luckily I was able to do this.”

When asked how he got a jersey with his name on it sorted out so quickly, Malloy said he pulled strings with his brother-in-law whom he called “the best”.

Another familiar face from the AIHL who played in the Sydney classic was Rory Rawlyk, an import with the Ice Dogs this season.

The shift in AIHL schedule gave Rawlyk, who has done stints in the East Coast Hockey League and American Hockey League, the opportunity to suit up for Canada.

“It was a great experience,” he said. “Any time you can put the red and white on and play in front of a bunch of fans it’s a really cool experience.”

Rory Rawlyk in the halls, returning to Canada’s changeroom after period two.

This year is Rawlyk’s 15th season as a professional hockey player.

On how he came to be in Australia, where the league is classified as semi-professional, Rawlyk said it was simple: “They called me up asking if I’d come to Australia. So, here I am”.

He had been asked in previous years to play in the classic. But this year, already being in Australia, he was able to.

“Already being in Australia was pretty convenient,” Rawlyk said. “We didn’t have a [AIHL] game this weekend so everything worked out really well.

“It was a lot of fun. There was a lot of great hockey players. It felt nice to be back playing at that level and obviously playing in front of a crowd like this and an arena was a cool experience. And having some legends like [Darryl] Sittler and meeting those kind of guys was really exciting. Overall, it was a great experience.”

Rory Rawlyk after the 2017 Ice Hockey Classic event in Sydney.

Now acquainted with professional- and AIHL-level hockey, Rawlyk was able to provide an assessment on what an event like the Ice Hockey Classic provides Australian fans of the game.

He said it gives fans a taste of what the NHL experience was like, and a taste of high level hockey.

“They put on a really good show here. For us it was great, so I’m sure the fans had a great time, too.”

For more of our coverage of the 2017 Ice Hockey Classic, click here.