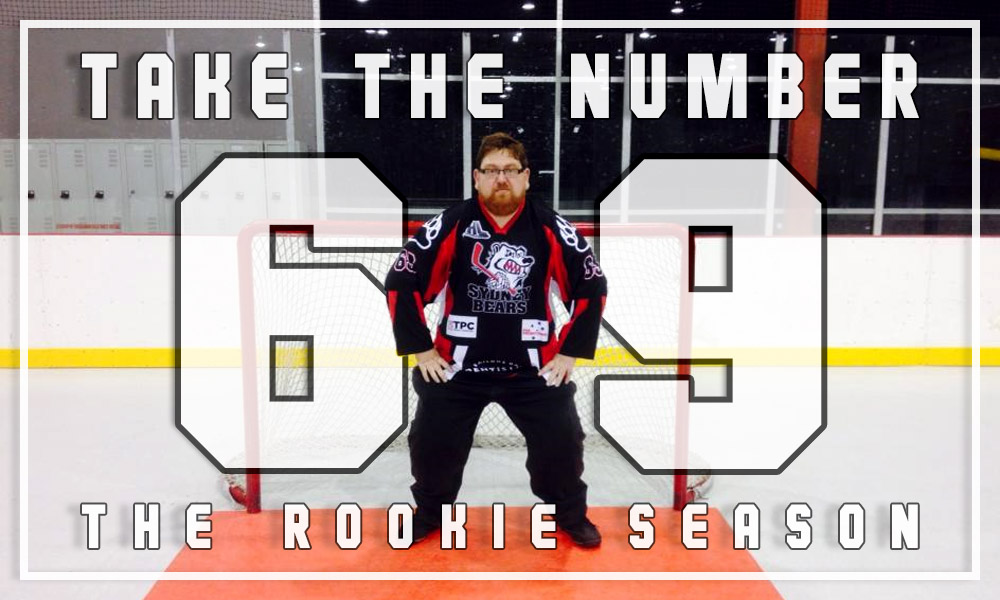 Welcome to Take the Number 69, a blog by Eric Brook charting his ice hockey journey from being introduced to the sport, volunteering with the Australian men and women’s ice hockey leagues, learning to skate and now playing in the “beer leagues”. This week, Eric regales readers with tales about his second game and first point, plus the new routine he has settled in to.

With the conclusion of game one and a 5-2 win by my Jets, I was looking forward to the start of a new week before game two.

My days would consist of domestic duties and caregiving while my nights would be filled with various activities related to hockey.

An immediate take away from game one was that I now had a game plan to work with and some tactics that I could use in various phases of play. I also noticed some natural confusion with line changes during the game which will improve with some planning and more experience. I also watched some YouTube videos for specific tactics.

There is only so much that a beer league level player can learn on the ice about how to actually play and strategy while being coached on the ice.

After Tuesday night’s game and two consecutive days of skating, Wednesday night’s pilates session was just what I needed. A good way to actively stretch but also relax, I have been doing pilates on and off once a week for 18 months. My usual Monday morning session can be problematic in terms of my usual routine while the Wednesday night session is usually not an option for me. It will be a good way to recover after Tuesday’s game.

Wednesday’s session saw me with mostly a new to me class and a new to me instructor. My instructor was unsure if the guy standing in front of her could cope with the session but she was relieved when I told her of my previous experience. With a smaller than usual class – possibly due to winter and the night of a State Of Origin football match – I enjoyed the session. I know that my balance and strength and endurance has increased since doing pilates. It was a much earlier night as I was traveling locally to the venue instead of one side of Sydney to the other.

Thursday and Saturday nights were rest nights which I was looking forward to. It was a nice night just to relax in front of the TV and process some of the thoughts of the week. With what turned out to be a busy Friday night and on ice sessions planned for Sunday, Monday and Tuesday, rest is also important. After all, I am also on leave from my place of employment!

Friday turned out to be an extra long session. I started with some instruction about some specific hockey stretches off ice. I then completed about half of the general skating session where I would have to avoid kids and teenage girls – great for working on my vision! With the start of the Friday Night Hockey season delayed, I surprised myself by agreeing to take part in a 4 on 4 scrimmage with some other (more advanced) Beerginners and Friday Night Hockey players.

Using some of the tactics that I had learnt since Tuesday’s game, I almost scored again in close proximity to the goalie and the net. With one less player on the ice, the smaller Ice Zoo surface opened up somewhat. It reminded me of watching the NSA Stampede 3 on 3 tournament in Newcastle in January.

Despite having extra space, there were some players not using the extra space that they had. If some of the other players had of passed the puck to me, I would have liked to have used the extra space. I also worked on taking the puck off attacking players – something I have not done a lot of to date. I did have flashbacks to high school grass hockey as a defenceman.

Fresh from that Friday night scrimmage, I did have thoughts of also signing up for Friday Night Hockey but to borrow a term from my mum that she often said to me growing up: “It’s not you I’m worried about but it’s the other idiots”. Certainly something to aim for but under good advice from hockey minds I respect, I put that to one side for now.

Sunday night saw a new Beerginners only training session commence. After watching and commentating on a heart stopping Sydney Bears win against the Adelaide Adrenaline at Macquarie Ice Rink in the AIHL, I headed across town to Ice Zoo.

I’d miss being on the ice this week but did get to watch a couple of the newer Mighty Drunks skaters working on various skating and playing drills. An interesting one for me to watch was watching faceoff practice – certainly one that is better in small groups compared to the many people at Monday night’s development class. I’ll be able to commit to this session around AIHL games for the next few weeks. Ice time isn’t cheap so let’s hope that more people come to the sessions!

Faceoff training – no, not the movie.

Once again, there were many people at Monday night development. While there was a small drop in Beerginners numbers, it was good to see so many people learning various facets of skating and play. Personally, I’m pleased to report an improvement with the amount of push that I am getting skating backwards! So far, I have skated backwards about a skate length in game one to be in the correct position at a faceoff but the improvement is pleasing to note. It still isn’t game ready just yet, though.

Two hard fought games on week two with an increased intensity. In the opening game, Wayward Sons recorded their first Beerginners goal and win, winning 3-1 against Mighty Drunks. Interestingly, the Hayman brothers combined for the Drunks’ only goal of the game.

What did work for the Jets was teamwork, determination and battling hard. A Jets goal after 16 seconds set the tone and we won 3-2. So far, Jets are undefeated after wins against the Mighty Drunks and Trash Pandas.

I made my debut on the scoreboard but I had to fight hard for it. In my own half, I passed the puck off my backhand (I have one of them?) and found the hard charging Ash who undressed the goalie at the other end. I was cheering on as I was chasing the puck up the ice just in case. My backup wasn’t needed but it is always good to chase and assist in that breakaway situation and I did my best to keep up.

After celebrating – no hard celebrating until I score a goal, Funesy! – I return to centre ice to hear that the referee didn’t get who assisted Ash on the goal: “69, dude!” I called out as I skated towards the bench. I made sure at the intermission that it was correctly recorded. After all, it is my first hockey point!

The Jets’ teamwork and line changes were a lot better this week. It’s certainly a developed skill and one that even elite teams can struggle with from time to time. Certainly a work in progress! Faceoffs are improving too, even considering an unusual one where goalie Denis took a defensive zone faceoff then zoomed back to his net! I’ll have to ask the Bears or Sirens goalies that I know to confirm if that is even legal!

As the game progressed, the intensity kept up. I was also keeping up and playing a role all over the ice and on the bench. I was doing a lot of skating on and off the puck with some forechecking thrown in for good measure. The teams off the ice were enjoying the battle and gave me good feedback about my performance.

The little battles and the close calls – including a shot from line mate Ryzer that was inches short – were all being celebrated. I even joked with the referee and asked if he could refer it to Toronto NHL style. Being the only zebra on ice with a rink filled with players with a wide range of skills and hockey knowledge is certainly a tough job!

There was a lot of positive talk and support on the Jets bench. The Jets were certainly firing up in and out of the danger zone without heading into goon territory. Jets held on and claim the 3-2 victory on bin night against the Trash Pandas. The positive talk continued after the game as we compared our experiences and shared some stories and laughs.

After the game, I ended off to the Erskineville Hotel for some relaxed after game drinks with players from Wayward Sons (next week’s opponents), Mighty Drunks and Jets present. The banter has certainly increased, especially in the absence of the newly named Bin Chickens at post game drinks. It was a nice end to a good night’s hockey. Bring on the week and bring on week three!

What’s Beer League without the beer?

Eric the Pylon is dead. Welcome, Eric the Jet!

Progress by the end of game two:

Skating forwards: Good. Faster for me but not compared to some others.
Skating turns: Good. Need to remember which foot leads on which turn during training.
Skating backwards: Improving. Have managed to get more initial push. Not up to game standard.
Stopping: Needs improvement. Can stop using the right blade only. Usually prefer to decelerate or turn to change direction.
Passing the puck: Good while stationary. Little experience while moving.
Shooting the puck: Came close to scoring near the crease in week one and at a scrimmage. No shots from faceoff circles and beyond.
Stickhandling: Not a lot in game situations.
Positioning/tactics: Improving now that I have been given a game plan. Doing more in defence situations.