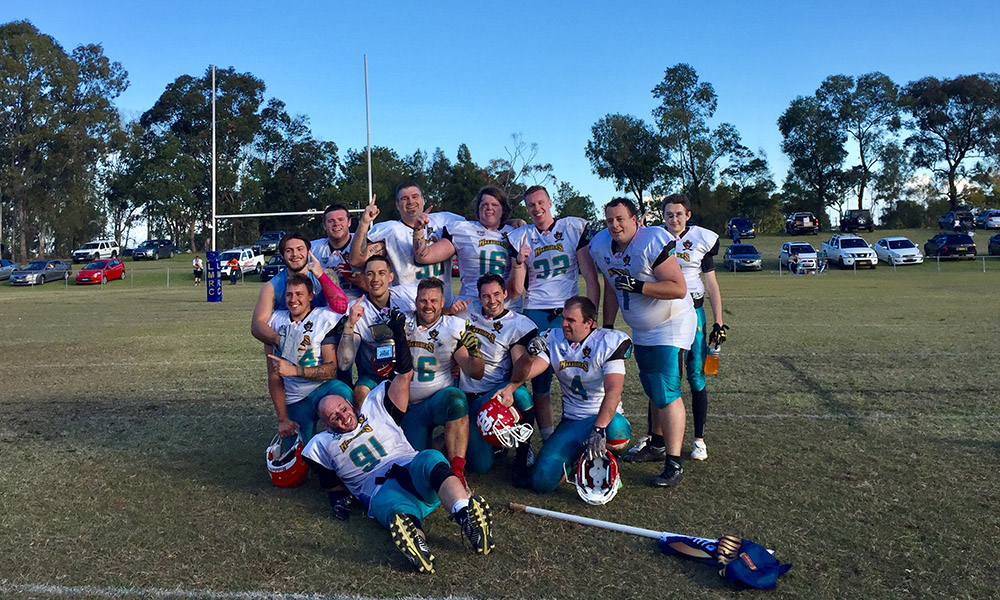 Ask any athlete what winning a championship feels like and they will almost always express that it’s unbelievably sweet.

For the Lake Macquarie Marauders, winning the 2017 Hunter Gridiron League championship on Sunday was, perhaps, the sweetest moment of all.

The side completed one of the grandest of sporting fairy-tales: going from a bottom of the ladder, winless first season in 2016 to taking out the championship this year.

“I couldn’t have done it without the boys.

“Some of these guys have busted their asses every week like Cody [Cox], both sides of the ball making tackles everywhere, Shannon [Turton] and Brayden [Schaefer], absolute warriors.

“I gotta give it to my boys. The defence they played was like they played all year – it was phenomenal. Hands down best defence in HGL 2017.

The Port Stephens Bombers (left) and the Lake Macquarie Marauders (right) line up to do battle.

In almost complete turnaround from last year’s performance in the HGL, the Marauders won four, drew one and only dropped one game this season.

They went into the Hunter Bowl – HGL’s championship game – on the top of the table.

An argument could be made that it was the final that had to be played. It was the Bombers that delivered the Marauders their only defeat this season.

For the Bombers, it is the second year they have just fallen short of winning the HGL championship.

But for the Bombers’ captain, Ben Johnson, the loss was especially heartbreaking.

“I have been lucky enough to captain these guys for two years and I’m hoping someone else will take the flame, bring it back here next year and win it,” he said.

When asked what positives he was taking away from the championship game loss, he said it was the effort the Bombers put in.

“They played their hearts out for the whole season,” he said.

“Two weeks ago we didn’t even think we’d be in this position.

“And same story as last year.

“To even make the final and come this close, that’s an honour in itself.”

The Bombers were first to score a touchdown in Sunday’s game, played at HGL’s home field in Speers Point, Newcastle.

In what was described by players as a “physical” and “defence heavy” game, the Bombers led 6-0 into the second half.

It was a defensive lapse from the Bombers that saw the Marauders able to score before the final horn was sounded on the game, tying it up and sending it into overtime.

A “lovely pass” that Schaefer “plucked” out of the air for a touchdown sealed the Marauders season with a championship.

Marauders Quarter Back, Shannon Turton, looks for a passing option down the field.

“It was a very physical, defensive game,” Bondin said on Sunday’s game.

“Both times we’ve played these guys we’ve struggled to move the ball.

“They’ve got a really fast defence.

“We were just struggling a bit.

“We got a good pass down the sideline and Jules [Julian Hazel] made a hell of a catch, which he’s done all year, he makes a catch and busts away.

“Unluckily we missed the PAT [points after touchdown] to win the game.

“In overtime we just had to stop them for scoring.

“Then, a turn through a lovely pass, Brayden’s just plucked it [ball] out of the air and boom, we got a trophy.”

The Marauders are the second team to have their name etched on the HGL championship trophy, next to the Hunter Valley Miners who won in the league’s inaugural season in 2016.

In a reverse season to the Marauders, the Miners had a winless 2017 and finished in fourth place. The Newcastle City Cannons ended their season third on the HGL ladder.

Despite the competition on the field, there was no love lost between the players of each team.