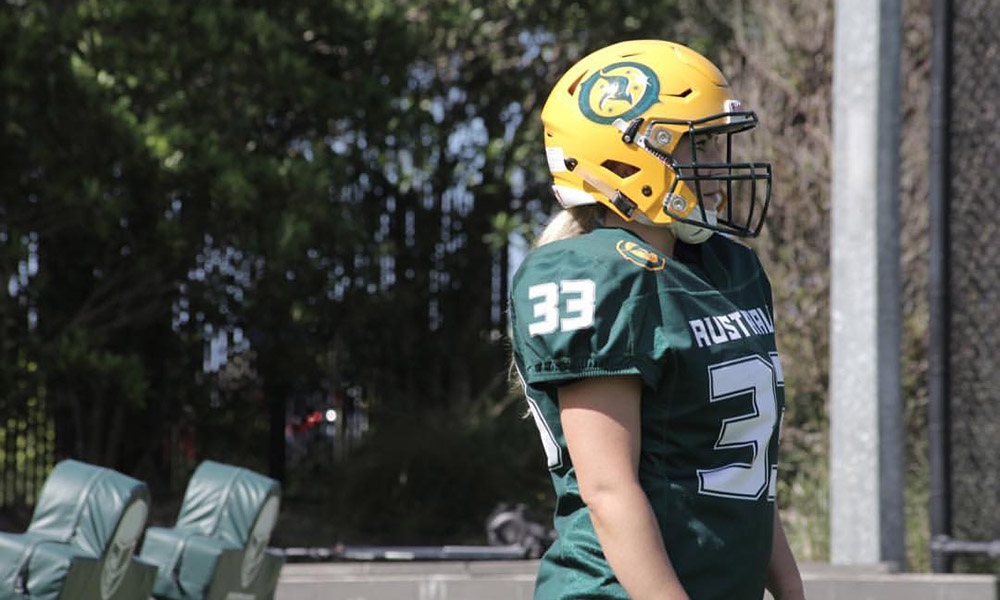 On Thursday morning, Matilda Quist flew out of Australia and towards a dream that has been almost two years in the making.

The linebacker from Newcastle, NSW flew direct to Vancouver, Canada where the women’s world championship for gridiron will be staged.

“I think now, in this week, it feels more real,” Quist said before leaving.

Quist, or Tilly as she is widely known, is the only Novocastrian on the 45 person roster set to play for Australia in the International Federation of American Football’s championship event.

But it is every woman’s first time on the team.

In fact, it’s the first Australian women’s team in the world championship.

It has been a hard slog getting to Canada for all the women selected, but perhaps more so for Quist.

The first training camp, where coaches and selectors could see the women in action, was held at the start of 2016.

The camp went well for Quist, and she was confident of being selected for the team and living out a dream – playing the sport she loves for her country.

She tore a finger tendon while playing rugby and had to miss the NSW women’s gridiron league season with the Newcastle Cobras.

The injury to her index finger saw Quist in a cast for eight weeks and a stitch through her nail.

It forced her to take time off sport and work as a dump truck driver, and from pursing another dream – joining the NSW Fire and Rescue service.

It also meant that Quist would go into the next Australian team camp, for selection, in February 2017 without having played a game in almost 12 months.

But in some ways, the injury helped.

Unable to play or work, she put four months of solid time in the gym working on strength and explosiveness.

“Having the time off work has actually in a way been good for my performance because I’ve been able to spend so much time training and recovery,” Quist told Fairfax Media in February.

“Really it was eat, sleep, train, repeat for four months so, if anything, it’s worked out pretty good for camp.”

The selection camp in February, 2017 drew a large number of hopeful participants

By day three of the eight day selection camp, held in Queensland, Quist said she had started calling it “death camp”, that’s how intense it was.

“I had blisters on my feet by the end of day two,” she said.

“It was intense; so physical.

“We kept being reminded that it wasn’t a training camp, it was a selection camp. You had to be at your best.”

“But I loved it. It was just one of those things you had to do to be selected.”

She also had to fit in training for the Australian team.

With players spread all over the country, there was no opportunity for the full squad – the Australian Outback women’s team – to train together before leaving for the championship.

This required each player having dedication to the strength and conditioning regime set out for them by Sydney personal trainer John Stuart, from Metamorphosis Speed and Strength.

Quist said Stuart, whom she has worked with in the past, focused on strength training first and in the last few months before the big event, had players focusing on conditioning.

The hardest part, however, was the last week where players were ordered to have a break.

“They told us to have a rest, which feels weird, not to train,” Quist said.

“But it’s an important part of training. You want to be fired up at the right time, which means you need your body to recover.”

Instead of lifting weights in the gym and working on small, explosive movements, Quist has simply enjoyed taking her dogs for a walk and doing yoga.

In a Facebook post, Quist said she immediately set out exploring the city and found herself at a fire station.

The Australian team, coached by Jen Welter, who, amongst her many credentials, was the first female coach in the NFL, will stay at Simon Fraser University in Vancouver.

There, they will have the opportunity to prepare for the main event as a team.

After an eight day training camp, the squad will move to Langley, British Columbia where the three day International Federation of American Football (IFAF) Women’s World Championship will be held.

“Alongside teams which have built a pedigree in the competition, we welcome some new additions who have already demonstrated that they will add real value to the competition.”

The United States is looking for its third consecutive gold medal after winning the last two editions of the world championship event, the last against Finland in 2013.

One of the ‘new additions’ McLean said was new to the competition this year is Australia, who will face host nation Canada in the first day of competition, on June 24.

Finland will play Great Britain and Mexico will go to battle with championship contenders Unites States.

Day two of the championship will pick up on June 27.

June 30 will see the final round of fixtures, plus the world championship final.

Australia may be the new team on the block, but they are not in it simply for the experience.

Quist said the women were all on the same page when it came to the championship – they’re in it to win it.

“We’re the underdog, but I think we’re going to surprise a few countries,” she said.

“Our goal is to compete and win a medal. How amazing would that be, going to our first world championship and winning the gold medal?”

The 2017 IFAF Women’s World Championship will be streamed. Watch the games on the Football Canada home page.