A hockey of my own 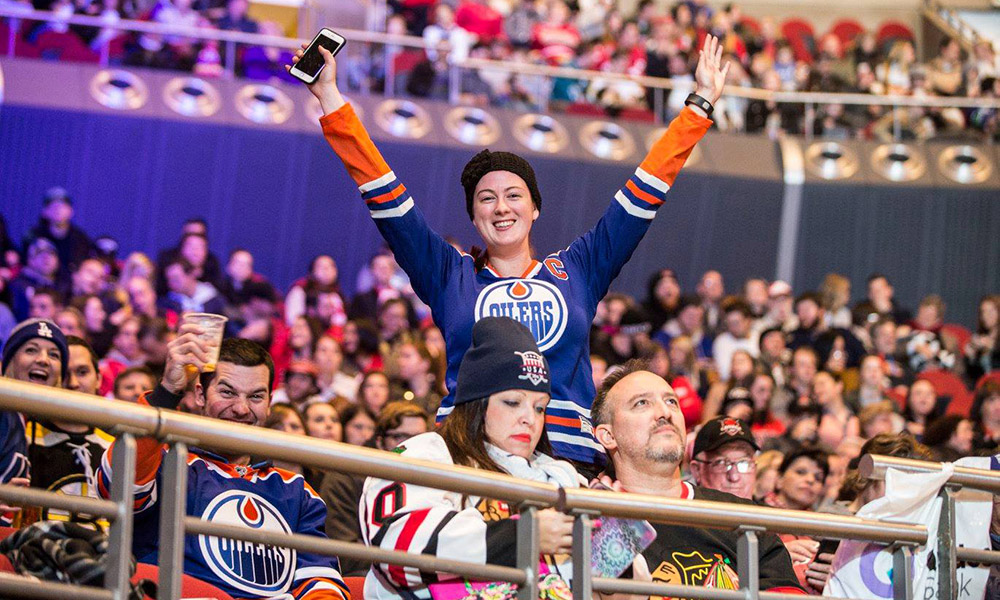 In just a few days a string of world-class ice hockey players from the United States, Canada and Europe will make their way to Australia for the Ice Hockey Classic.

It is an event with little consequence other than to showcase the sport of ice hockey, and some of its stars, to Australians. But to many, the Ice Hockey Classic means a great deal. It’s all the pageantry of a favourite sport, something a fan may have only watched on a screen or read about, in their own backyard. Something they may have dreamed that one day they will be part of within reach.

For Grassroots writer and ice hockey fan Alyssa Longmuir, attending last year’s Ice Hockey Classic was something special. Before this year’s tour begins, read in Alyssa’s own words what an event like the classic means to an Australian ice hockey fan.

Being an ice hockey fan in Australia isn’t always the simplest thing.

Between games happening during the day with starts ranging anywhere from 4am to 1pm, the obscene cost of shipping for NHL merch and the crippling knowledge that there is a fair chance you will never make it across the wide expanse of the Pacific Ocean to see your favourite team play, sometimes there is not a lot to look forward to.

Sometimes you feel every single one of those miles that separates the two continents. But sometimes –sometimes – it’s great.

On a day when a kid from Arizona went first overall to the Leafs, during a week that saw Las Vegas welcome its first NHL franchise, I stepped out of my car to see more NHL jerseys that I have ever seen in my lifetime. And it was something special.

Getting to watch a giant game in a giant arena filled with fans was more than I ever could have brought myself to wish for. It was more than I could even let myself dream.

Wayne Gretzky after the charity match between Team USA and Team Canada at Qudos Bank Arena on June 25, 2016 in Sydney, Australia.

What mattered that this was an ice hockey game, and it was mine.

The game itself was tight, with both teams leaving the first tied at one before USA scored in the second.

I was rinkside for the final minutes of the third period, standing behind Team USA’s goal with the full knowledge that Team Canada had never won a game in Sydney during the three years this event has been running.

I didn’t expect to see Canada level the score. I never expected to hear a full arena chanting ‘Ca-na-da’ as if they could will the puck into the net by force. I never expected just how loud it would be when Nolan Yonkman finally snuck the puck in with less than three minutes to go. It was deafening.

Nolan Yonkman from Team Canada on the bench during Wayne Gretzky Ice Hockey Classic between Team USA and Team Canada at Qudos Bank Arena on June 25, 2016 in Sydney, Australia.

My eardrums might genuinely never be the same again.

What followed next was five minutes of three-on-three overtime and a shootout – a shootout that went for so many rounds I lost count. I think it was six.

I’m pretty sure the person in the stands directly above me was muttering some version of ‘you can do it, Canada’ the entire time, and I was inclined to agree.

In a game that at the end of the day meant nothing, the entire crowd was on the edge of their seats, the quiet rumblings of a chant turning into full blown cheers every time Canada scored or their goalie stopped the puck. For six rounds, it remained even. For six rounds, I felt my breath catch in my throat every time a player stepped up to try.

Chad Nehring from Team Canada scored the winning goal. I might have almost cried. Not because Canada won (though that truly did make my night), but because this was it.

This was the dream that I hadn’t allowed myself to have. This was ice hockey, real professional world-class ice hockey, being played in front of me.

USA players and Dave Hanson, of Slapshot fame, during the Wayne Gretzky Ice Hockey Classic between Team USA and Team Canada at Qudos Bank Arena on June 25, 2016 in Sydney, Australia.

I literally didn’t know how to react other than to clap and cheer and sing along with the crowd. This was a game with all the lights and pageantry of the NHL. This was a game that was worth more to me than anyone in a traditional hockey market will ever fully understand.

This was a game happening in Sydney, Australia, an entire world away from the frozen lakes of Windsor, Nova Scotia where it was first invented.

I had the opportunity to speak with Ben Scrivens after the game about his thoughts and feelings in a week that, for me at least, has seen the rise of the ‘non-traditional market’.

“It’s easy to sell the game in Canada; that’s the easiest job in the world, selling hockey in Canada,” he said. “We have got to challenge ourselves as players and a league to try and tap into other places. It’s a great game, and it was great to show the people of Australia how fun and exciting hockey can be.”

Hockey is always going to be Canada’s game: it’s so deeply entrenched in its culture, its history, its very fabric. But watching a stadium full of fans light up after a goal, watching people pull jerseys over their heads in the foyer, watching peewee teams skate out on the ice during intermission – that’s something I want everyone to have the opportunity to experience.

So, in a week that saw Las Vegas get a hockey team and a kid from Arizona who grew up skating on synthetic rinks go first overall, I got a hockey game. And while that hockey game meant the world to me, it meant more to all the kids sitting around this country, the driest continent on Earth, dreaming of frozen ponds and the smell of fresh ice.

In the words of Wayne Gretzky himself: “Nobody ever thought a kid from Arizona would be a No. 1 pick. So what’s to stop an Australian kid being the No. 1 pick 20 years from now?”

Want more details about the 2017 Ice Hockey Classic? Check out our story from last week.