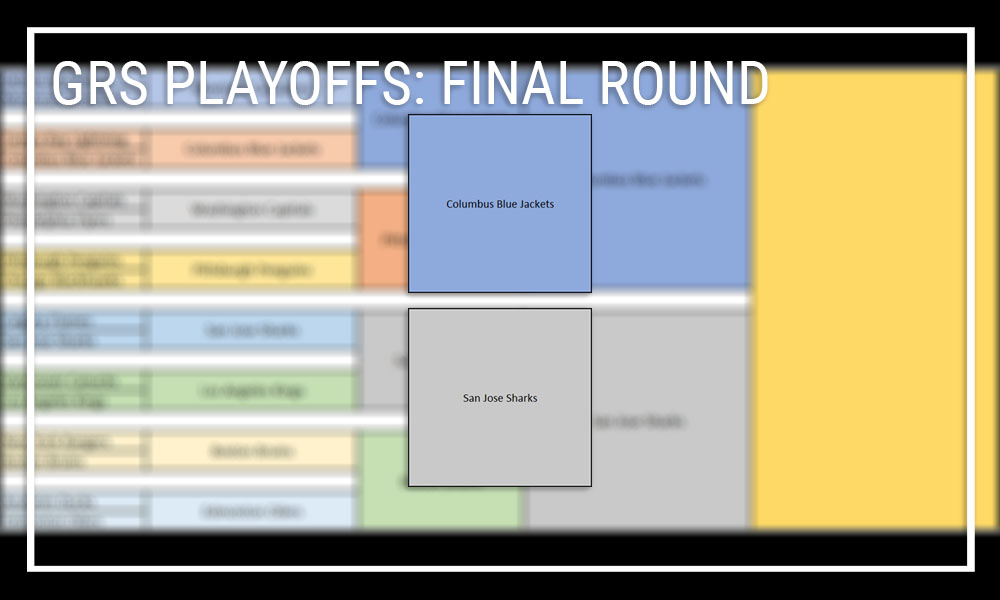 After 15-odd weeks of research, investigation, game watching and playing, tweeting, talking and elimination, I can finally say that I support a team in the NHL.

I am not going to leave you hanging on right to the end, waiting for me to go through the pros and cons of the Sharks and Columbus Blue Jackets to announce who I have picked. I’m coming straight out with it.

Hello, my name is Ellie and I am a San Jose Sharks supporter.

Image, and jersey, courtesy of Pic By Wulos.

I can already hear some groans coming from the bleachers (perhaps the loudest being from Grassroots producer Michael). I’m sorry I didn’t pick your team, guys and gals. And for the Sharks fans out there, let’s talk Brent Burns, I mean, Sharkies.

But, I have my reasons as to why I picked the Sharks.

For a NHL newbie, the Sharks have a lot of appeal.

They’re fun, funny, are social media savvy and have enough gimmick to make you want to be a part of it all.

And while they “choke in the playoffs”, as I have been told countless times, they’re a decent hockey team.

I only knew what my friend Beth had told me about them – “beards and puppies” (which makes me wonder why they weren’t on my radar sooner).

If you were following along from the start, I’m sure you (like I) thought I was going to pick the Canadiens. I still like the Habs, though.

So, why the Sharks?

The guy is hilarious. He is toothless but always smiling. You look for Brent Burns videos and you’ll find “Brent Burns Singing”, “Brent Burns Eating Pizza During Interview”. He has glorious tattoos. He looks amazing as a bobble head figurine. He is a massive animal lover. He’s a great defensive player, a killer point man, and he has an amazing beard. What more do you want from one guy?

Equally hilarious is this website: www.brentburns.com. It’s not the Sharks’ Brent Burns. But you should definitely check it out if you want a laugh.

Pavelski is a grinder. He works hard, a lead from the front kind of guy. Joe Thornton is just as beautifully bearded as Brent Burns. Michael Haley is just as hilarious as Burns. Listening to him mic’d up during a game is pretty entertaining (he’s good for a heckle).

3. As I have mentioned previously, the Sharks SLAY on social media. They’re hilarious, are ahead of the trend, punny, share heaps of good content and their marketing is brilliant.

4. The Sharks skate onto the ice to the Jaws theme song, through a giant sharks head. Plus fans wear sharks on their heads.

5. I LOVED the Sharks for Life ads they ran in January and almost died at the Burns and Joe Thornton one. You gotta watch it.

6. Their arena, the SAP Center, is called the Shark Tank and it’s construction was crowd pushed into life.

7. The Sharks’ SB Nation site is call Fear the Fin. How good is that?

8. The Sharks are a ridiculously charitable organisation. During the 2015-16 season, the Sharks Foundation donated a franchise-record of $1.5 million to support the Bay Area. Since its inception in 1994, the foundation has donated more than $10 million.

9. The Sharks’ AHL affiliate team – San Jose Barracuda – appear to be just as grand as their NHL counterparts. Their logo, much like the Sharks’ but with a barracuda, is pretty funny.

10. I look pretty good in teal and white.

11. The Sharks’ pre-game entertainment is stellar. Lights, music, laser sharks swimming around on the ice.

Attendees of the AWIHL Finals got a sneak of which team I picked. The Sharks jumper was a little bit of a giveaway. Picture: Pic By Wulos

12. I love the story about Joe Paw-Velski, the cat that emerged out of nowhere and ran on to the ice, kind of breaking a losing streak for the Sharks. Then the Sharks’ media team had a field day, photoshopping Joe – who became Jo when they found out he was a she – into photos of the Sharks on the road (to keep the luck rolling). Sharks forward Patrick Marleau and his family ended up adopting the cat.

Okay, I think 12 points is enough to get a picture about why I have ultimately decided to pick the Sharks.

I do not profess to know everything about the Sharks, nor about the NHL, but I have certainly learnt a lot in the past few months.

Thank you to everyone who has stuck around and read my blog, and to those who have made suggestions and argued why I should pick their teams.

It has meant a lot to have you involved.

I think that all I have left to say is, Go Sharks!