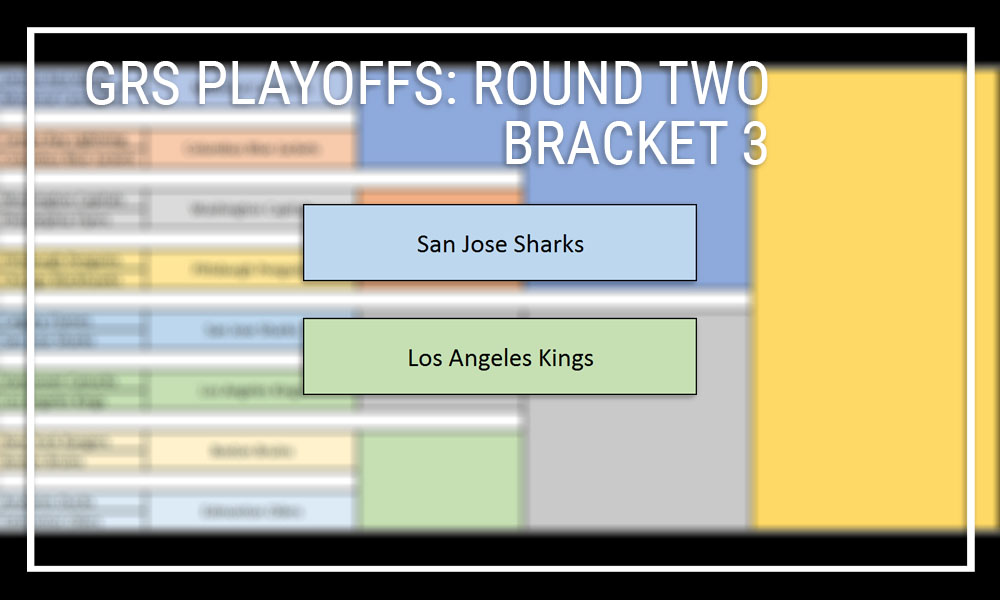 Today’s contest is between the Sharks and Kings, the NHL’s two best (like, smash it out of the park best) teams on social media. Oh, and they’re good teams on the ice, too.

If you’ve been following along, you would know I do love me some social media banter.

The Sharks and Kings also happen to be teams my good friends (also Grassroots buds) Beth and Michael like.

Well, Beth follows the Pens. But the Sharks are her alt team. The Kings are Michael’s team.

They haven’t been pushing their agendas on me at all. Actually, Beth and Michael gave me the best insight possible going into this week’s blog post. They were able to tell me what it is they like about their teams, and why (in the case of the Kings) they aren’t doing so great this season.

Standings (as of Tuesday)

San Jose: The Sharks are currently ninth on the NHL ladder, and third in the Western Conference standings. After making the NHL final for the first time in franchise history last season, the Sharks are making a solid effort to back that up this year. If they stay consistent, and in the top three of their Conference, they’ll be a shoo in for a second playoffs appearance.

Martin Jones (goalie) and Brent Burns (D) are two star players for the Sharks this season.

Burns scored his 15th goal of the year in the Sharks’ 3-2 loss to the LA Kings on New Year’s Eve. The bearded giant went into 2017 leading his team in both goals and points, as well as leading all defensemen in the league in both categories.

Jones, traded from the Kings to the Bruins who was then traded to the Sharks, is a solid, league-average goaltender at this point in his career. And it’s only a young career. The guy is 26. He’s full of potential and has shown he’s up to the task.

Los Angeles: The Kings are pretty far down the NHL ladder at position 22. From 58 games played, they’ve won 28, lost 26 (outright wins are only barely in front) and have gone to OT 4 times. Their home and away W, L, OT score line is pretty dire (only beaten by the 8 teams below them) at 15-10-1 (home) and 13-16-3 (away). The Kings are coming 10th in the Western Conference standings (seven below the Sharks).

To say this isn’t a good season for the two-time Stanley Cup champions would be correct.

I asked Michael what’s up with the Kings this season. He said: Too much money spent on players that once shone brightly, but have fallen behind (even the new captain, Kopitar, is a shadow of his former self). It’s hard to watch, because Kopi, Gabbo, Carter, Toffoli, Pearson, Doughty, Martinez, Budaj [are] all talented players. Nothing’s clicking at the moment. I think that there’s at least one more NHL coaching change coming this season.

This is also a really good article about why the Kings aren’t doing great this season.

It’s a little ‘funny’ in that ‘funny’ way that I’ve come to this point in the season and find myself deciding between the Sharks and Kings.

Aside from my friends following these teams, since the start of my blog journey I have admired the Sharks and Kings for their social media prowess.

When reading up on these teams for this blog, I also found that the Kings opened their 2015-2016 season against the Sharks. It was also the Sharks that ended that season.

The Sharks and Kings met in round one of the playoffs. Sharks took the series 4-1.

I asked Beth why she likes the Sharks, she said “puppies and beards”, as well as: Atmosphere, the characters on the team, just the goofiness of coming out of a sharks head and the Jaws theme song.

I asked the same of Michael about the Kings: Back in 2011 they were one of the first of two NHL teams we [Beth and I] saw live. In 2011-2012 playoffs they were the only team remaining that I had seen live. So I had followed their journey through the playoffs and they happened to win the Cup. They played with a lot more skill than they’re exhibiting now.

San Jose: There have been nine head coaches in Sharks franchise history. Peter DeBoer was fired as head coach of the New Jersey Devils in December 2014, and took the same position with the Sharks in May 2015.

DeBoer has a reputation for being a defensive-minded coach who stresses puck possession and has a knack for applying pressure.

Personally, I think DeBoer has it pretty rough. His wife and five children stayed in New Jersey when he moved to coach the Sharks.

No offence to Dazza, but, you see the resemblance, right?

Los Angeles: Daryl Sutter is the 24th head coach in Kings history. Sutter has coached the San Jose Sharks, Calgary Flames (he dual coached and GM’d the Flames 2003-2010) and the Chicago Blackhawks, the team spent his entire NHL playing career with (1979 to 1987).

He joined the Kings coaching team with a wealth of NHL experience, but he sounds like a hardass. And clearly that’s not working for his team right now.

Los Angeles: Gustl Kopitar may be the best dog on Twitter. Gustl is Anze Kopitar’s adorable golden retriever cross poodle, who is regularly featured in photos with the Kings star.

I don’t know who, but apparently its approved by Anze, but someone started up a Twitter (and Facebook) account for Gustl and it has over 7000 followers.

And on top of that, the Twitter account is extremely active. To the point that when I was introduced to this account the other day, Gustl participated in the conversation!

Check out @GustlTweets the “official Comfort Dog of the #LAKings & their fans! 2016 Top NHL Dog on Twitter”.

A heap of the Kings players have dogs. I found a 2014 article – a little old, but still relevant – with a list of players and their dogs. Super adorable!

So, in April 2016 just before the Sharks and Predators took the ice for warm-ups, a small, black cat emerged from the player bench area, onto the ice and ran along the boards towards the giant Shark Head. Finding an open door, he was able to escape beneath the seating stands.

Jo on the run

He was called Joe Paw-Velski, until finding out it was a girl, when taken to a rescue shelter.

The Sharks broke a streak of bad games that night, and the Sharks had some fun with it on social media.

Sharks forward Patrick Marleau and his family ended up adopting the cat!

Brent and his wife just hanging with some ‘big’ kitty cats.

To say Brent Burns is an animal lover is a bit of an understatement. The guy practically owns a zoo. “Burns Zoo” was actually the subject of a CBC Hockey Night in Canada feature.

San Jose: Martin Jones’ 2016-2017 goalie mask is pretty sweet. I like that it has a heap of angry sharks on it, but in varying styles. So you’re not bored by all the sharks.

Aaron Dell’s mask is a unique take on the shark theme. It thinks its emulating the inside of the sharks mouth, but with wiring.

Los Angeles: I get that the Kings’ colours are black, white and grey but Jonathan Quick’s goalie mask is so devoid of colour its…. Boring.

Peter Budaj’s goalie mask is brilliant. Like Quick’s, it has that armour look but it has a drunk looking Ned Flanders on it sporting a crown. So good!

I also like Jeff Zatkoff’s mask. It’s a cool tribute to the history of NHL.

San Jose: The Sharks skate onto the ice to the Jaws music. When they score a goal, a tradition goal horn (a deep sounding one) goes off in short bursts and Get Ready for This by 2 Unlimited is played.

Los Angeles: The Kings have an annoyingly high pitched goal horn that’s sounded in short-ish bursts. Their goal song is “their” song. Shazam it and it literally is called “LA Kings Goal Song (Hey Hey With Horn Intro)” by Toners.

I am way more on board with the Sharks than I am the Kings. The Sharks are fun, they have real characters on the team, they’re a pretty good franchise, I’m excited to see how they go this season.

So, it’s the Sharks that are joining the Columbus Blue Jackets and Pittsburgh Penguins in Round 3.